„Willkommen zurück im Westfalenstadion!“ („Welcome back to the Westfalenstadion“) read a huge banner. Flags waved back and forth, and yellow confetti and streamers filled the air, soon mingling with the smoke from assorted pyrotechnics.

For the first time since February 2020, the ultras were back inside Germany’s largest football ground for a Bundesliga game, and they weren’t alone. From Berlin to Bielefeld, Kaiserslautern to Karlsruhe, football stadiums across Germany were full of the sounds and sights of the country’s fan culture.

„In Germany, our active fan scenes, our standing terraces and our socially inclusive ticketing are all elements which help create a close relationship with the fans,“ Werder Bremen chief executive Klaus Filbry told DW after the return of the ultras at his own club in recent weeks.

„Football only works when there is a symbiosis between the team on the pitch and fans in the stands. The players notice it, and it can help get a few more percentage points out of their performance.“

‚We have to stand shoulder to shoulder‘

In May 2020, after a coronavirus-enforced hiatus, the Bundesliga became the first major European league to return, albeit with „Geisterspiele,“ „ghost games“ played behind closed doors.

When supporters were allowed to return in limited numbers throughout 2021, unreserved standing terraces were replaced by seats, face masks were often mandatory, and tickets were individually personalized and linked to identity cards to enable contact tracing. 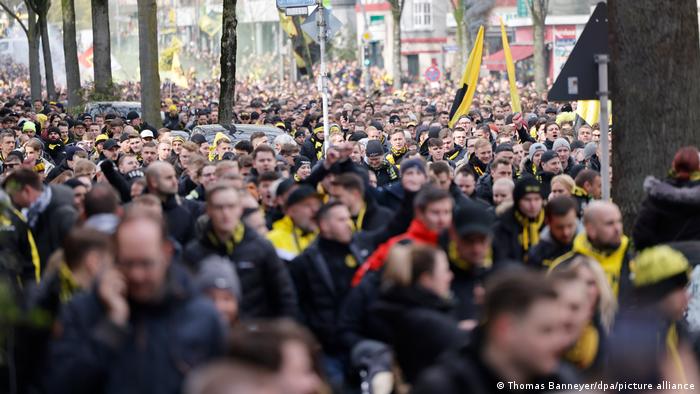 Ultras stayed away from Bundesliga stadiums during the pandemic, even when society was opening up again

Most ultras accepted the measures as necessary in the context of containing the pandemic but felt it was impossible for them to live out their fan culture under such conditions: freely, independently, actively and vibrantly. So, they stayed away, sticking to the mantra: „Alle oder keiner“ („everyone or no one“).

For the ultras, suspicious of the authorities and protective of their personal data even in non-pandemic times, it was a red line they wouldn’t cross. Borussia Mönchengladbach ultras briefly returned in September 2021 after local regulations were relaxed, but others stuck strictly to the „everyone or no one“ premise.

„There were different rules from state to state and from league to league, and the groups all had slightly different demands,“ explains Johannes Mäling, the editor-in-chief of Faszination Fankurve, the preeminent German news portal covering the country’s football fan culture.

„It’s been one big patchwork, and that’s how the return of the ultras has been, too.“

Without them, German football just hasn’t been the same.

„It’s been horrifyingly quiet,“ says Johannes Bagus, a social worker at the Fan-Projekt Dortmund, a pedagogical organization which works closely with young football fans and ultras.

„People are used to the ultras setting the tone on the terraces, but that was gone. People didn’t seem to know how to create an atmosphere.“ 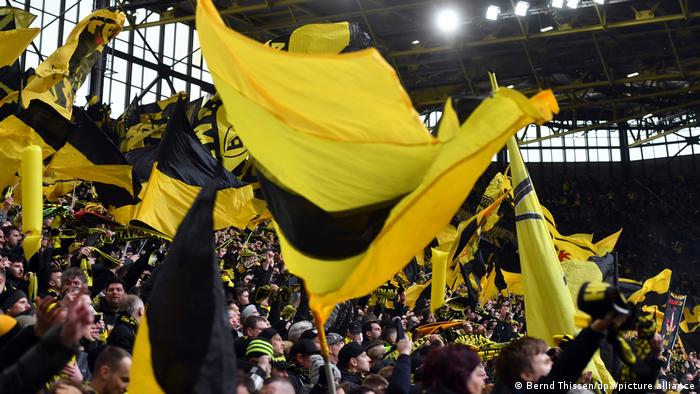 There wasn’t only a drop-off in volume, but a noticeable decline in supporter behavior. Without the ultras to self-police the terraces, discriminatory remarks which would normally have earned a telling off have gone unpunished.

On March 13, the Bundesliga game between Bochum and Borussia Mönchengladbach was abandoned after a linesman was stuck by a beer cup. „Something of a vacuum did indeed emerge,“ opines Mäling.

In the two years away from the stadium, Germany’s ultras have been left bereft of the focal point of their activities. But, across the country, the groups have remained together and have been active in different ways.

At the start of the pandemic in 2020, ultra groups were among the first to organize aid for those most at risk from COVID-19, going shopping and running errands for elderly people.

When devastating floods swept away people’s homes and livelihoods in western Germany in July 2021, ultras from local clubs were quickly on the scene, delivering supplies and helping to clean up.

And recently, ultra groups all over Germany have used their reach and organizational abilities to raise money for refugees fleeing the war in Ukraine. Bayer Leverkusen ultras even travelled in a convoy to deliver supplies directly to the Polish-Ukrainian border. 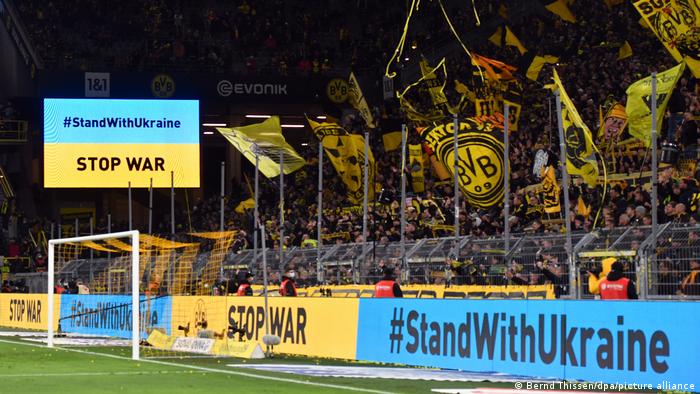 Ultras remained active in their community while away from the stadium, including helping Ukrainian refugees

„The ultras are charitable and social by their very nature,“ says Bagus. „Unfortunately, their public image is dominated by burning away ends and clashes with the police. But if you study their subculture more carefully, you’ll see that there’s a lot more to them than just ‚hooligans.'“

Fan and ultra groups were among the first to call for football to be suspended and heavily criticized the Bundesliga’s return in empty stadiums, which was necessary for the league to fulfill obligation to broadcast partners.

After the restart, the „Unser Fussball“ („Our Football“) initiative, which includes signatories from over 30 ultra groups, launched a series of concepts for financial reform in German football under the title „Zukunft Profifußball“ („future of professional football“). The proposals were officially presented to the German Football League (DFL), the company which operates the top two divisions of German football.

„At the start [of the pandemic], there were fears that there would be gatherings outside stadiums,“ says Mäling. „But the active fan groups have behaved responsibly throughout. Indeed, the fans have often been the voice of reason.“

‚More influence than ever before‘

The ultras have kept themselves busy, but two years without matches is a long time.

„The biggest challenge has been to keep people engaged with football and fan culture,“ says Bagus. „The life of the fan scene consists of group activities: matchdays with hundreds of people, meetings during the week, preparing choreographies and displays – that all disappeared.“

He’s also noticed a generational gap. „The teenagers who were with us are now too old for our youth social work, and why should young people be interested in fan culture when there’s no fan culture taking place? In the past two years, two generations of football fans have had no access to active fan culture.“

But Mäling insists that groups haven’t died out, saying community activities and social engagements over the last two years „show that the ultras are still very much capable of acting.“

The willingness to push reforms also remains, Mäling added, and the pandemic may have provided ultra groups with „more influence than ever before.“

„Particularly in the first phase of ghost games, we saw clearly how little value football as a product has without the stadium experience,“ he said. „The Bundesliga depends on atmosphere.“