Just over three years back, Rene Körner took a full-time position as a shift leader at a restaurant in the central German town of Magdeburg after the sudden illness of a family member derailed his plans to pursue a career in informatics.

The job seemed like a logical transition for the college dropout who had done several part-time stints as kitchen staff and waiter while in school. Above all, it offered a much-needed income stream that he needed to take care of his family affairs.

Just as Körner, a gaming enthusiast who loved assembling personal computers as a kid, was settling in his restaurant job, a little nudge from a friend set off his career on a completely different path.

„The restaurant job was fun, but it was not fulfilling,“ Körner told DW. „A friend, who was writing her doctoral thesis at Volkswagen, told me about this new programming school in Wolfsburg, Faculty 73. It offered a great opportunity: a chance to work for VW and do things that I really enjoyed doing.“

Last March, Körner walked out of Faculty 73 as a software developer with a full-time job contract from the carmaker in hand. He is now part of a team that is responsible for the smooth running of the company’s IT back-office services.

„For now, I am just having fun. I want to grow further as a software developer, as a product owner. These are interesting times at VW as it turns its focus to electric vehicles. It’s just what I had ever wished for,“ the 35-year-old said. 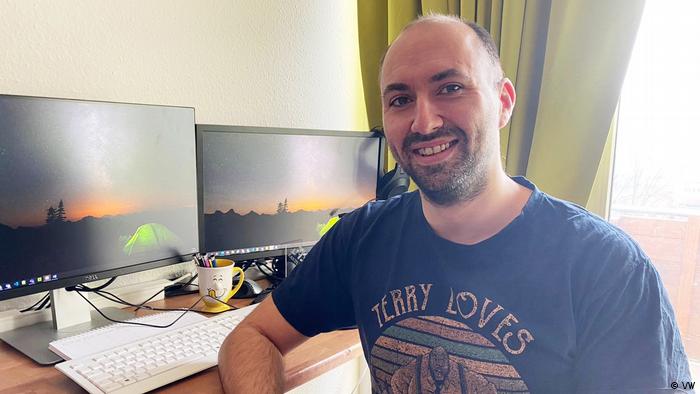 Faculty 73, the name inspired by Sheldon Cooper’s love for the number 73 in the sitcom „The Big Bang Theory,“ is a crucial part of VW’s multibillion-euro push into software as it gears up to knock electric car market leader Tesla off its perch.

The programming school is meant to help the carmaker maneuver through a paucity of IT professionals amid an intense battle for talent with not only its auto peers but also the likes of Apple and Google-owner Alphabet, which are also developing electric vehicles.

Located across the Mittelland Canal from Volkswagen’s global headquarters in Wolfsburg, Faculty 73 trains basic software developers within two years. It plans to train around 600 IT specialists by 2024, the majority of them from among existing VW employees looking to switch roles. The earn-while-you-learn program culminates with a VW job on successful completion.

„More than 70% of the students we enrolled last year came from within Volkswagen and most of them had worked on the assembly lines,“ Ralph Linde, head of Volkswagen Group Academy and the carmaker’s chief learning officer, told DW. „The switch from a blue-collar job to a white-collar one means a huge change. You can also see it in their eyes that it’s one of the biggest opportunities they’ve ever had.“ 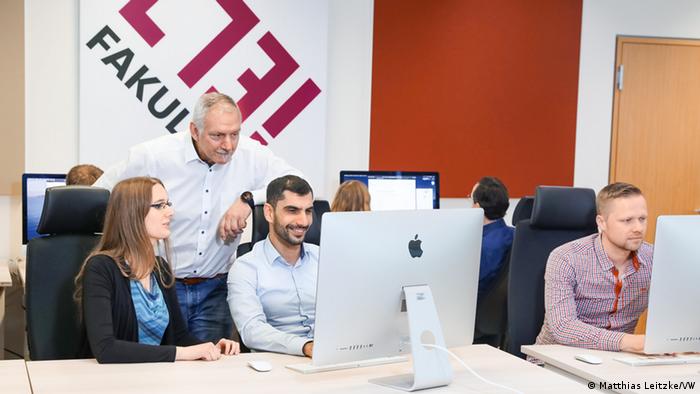 Faculty 73 plans to train around 600 IT specialists by 2024, the majority of them from among existing VW employees looking to switch roles

In search of undiscovered software talents

Volkswagen’s quest for software talent extends beyond Faculty 73 to another coding school in the city: 42 Wolfsburg. The carmaker is the biggest force behind the nonprofit school, supporting it with experts, hardware and donations. Microsoft and Google are some of the other partners.

Based in a red brick building inspired by the VW campus, the school is shunning conventional methods to produce the next generation of software professionals, many of whom, VW hopes, would end up working for the carmaker and help drive its radical transition to electric vehicles.

42 Wolfsburg stands out for what it doesn’t offer, much like its peers in the 42 chain of coding schools started by French entrepreneur Xavier Niel. There are no lectures, textbooks, or teachers, just peer-to-peer learning. The school doesn’t award any state-recognized degree and is tuition-free. Anybody aged 18 and above with a passion for coding can apply.

Borrowing from Silicon Valley’s fun-loving work culture, the place is equipped with an amphitheater, sleeping pods, video game consoles, a slacklining corner and the ubiquitous fussball table. The idea is to help students navigate the rigors and pressures as they train themselves to be top coders by implementing arduous projects.

„Volkswagen is very intrigued by the potential of our students and our learning concept,“ Max Senges, headmaster and CEO of 42 Wolfsburg, told DW. „There is an enormous need for talent at VW. They see both the potential to hire our people as well as to have their people come here as fellows and pick up some of the cultural and mindset aspects that we offer.“

Senges, a former Google manager, is currently busy setting up another campus of his unconventional coding school in Berlin, Germany’s IT hotspot. VW and its software unit CARIAD have also put their weight behind 42 Berlin, which is expected to launch in autumn this year. 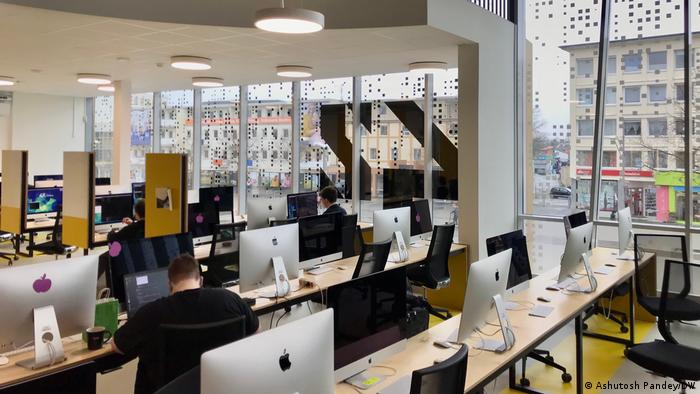 There are no lectures, textbooks or teachers at 42 Wolfsburg, just peer-to-peer learning

Software has emerged as the holy grail for carmakers, who have traditionally viewed it as secondary to hardware. Swiss investment bank UBS estimates software will be the biggest source of revenue for carmakers by 2030 with a revenue pool of $1.9 trillion (€1.7 trillion) in areas such as robotaxi service, in-car infotainment and advanced driver assistance systems.

With software expected to be the key differentiator in the future, traditional carmakers such as VW, Toyota and Stellantis, which UBS says are years behind Tesla’s software capabilities, have swung into action by investing billions of dollars, tapping Silicon Valley stalwarts and setting up separate software arms.

VW aims to develop 60% of software in-house, up from about 10% currently. The carmaker is investing €27 billion ($31 billion) over the next five years to drive its software pivot.

„Basically, the story is, if I do software in-house, I’d save a lot of money because I’m not making my suppliers rich anymore,“ Markus Baum from Roland Berger consultancy told DW.

The software ambitions of carmakers are likely to lead to a three- to four-fold increase in demand for software engineers by 2030, according to consultancy McKinsey, putting the industry in direct competition with tech companies with deeper pockets for software talent which is already in short supply. The European Commission estimates currently 500,000 IT professionals are needed in Europe.

„It’s a big problem if one looks to build all the software resources in Europe alone. And even worse to do so only in Germany. Our clients believe if you do it globally, it’s somehow manageable,“ Baum said, adding that his clients in the auto industry have been contemplating setting up software development centers in Asia.

For carmakers like VW, a big part of the problem is their image among young software professionals. Their entrenched hierarchies, obsession with processes, rampant red tape, lack of specialist career paths, influential unions, and location, often in smaller towns such as Wolfsburg and Ingolstadt, often push them down the pecking order of attractive tech employers.

VW is taking the criticism on the chin. It has set up a separate software unit, CARIAD, with a more agile work culture. It says it’s also working on reforming other business units.

„With Volkswagen being such a large company, it is only natural that we have different facets that are coexisting: in short, an old Volkswagen and a new one that we are trying to build with this transformation,“ said Linde, who is also responsible for driving cultural change at the company. „We are working on making it more agile, reducing hierarchies and improving work culture. We are doing everything to be attractive for the tech talent in the market.“