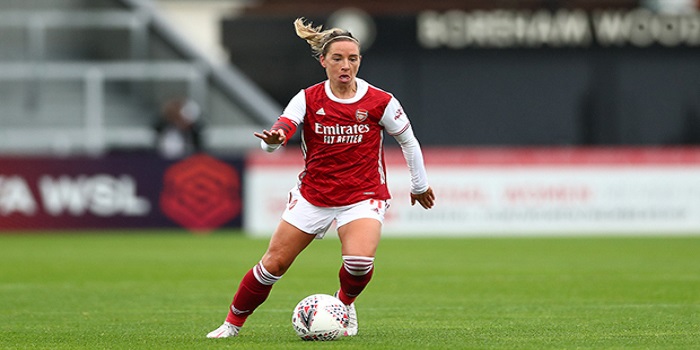 “We felt with a midfield diamond they would be quite narrow centrally, as soon as we got the first pass and they came out with a high line we thought their left-back would get drawn in-field towards one of our 10s and we found space on that side. It was something we prepared because it was one of the outlets we thought we could really exploit.”

So Joe Montemurro told me after the 4-0 victory over Everton on Sunday. I asked the question because it was very noticeable how often Arsenal attacked the Toffees’ left hand side. It was the source of their two opening goals and many other chances beside. Let’s look at how Arsenal killed this game early on by overloading on their right.

With Beth Mead and Lisa Evans on the right, Arsenal had a lot of width on that side of the pitch. On the left, it was slightly different, Jordan Nobbs nominally started there but she played inside of left-back Katie McCabe much more. Overloading the right meant that Nobbs could move into more central areas.

Look at her position as Arsenal build play on the right in the opening seconds. She is not positioned like a left winger at all. 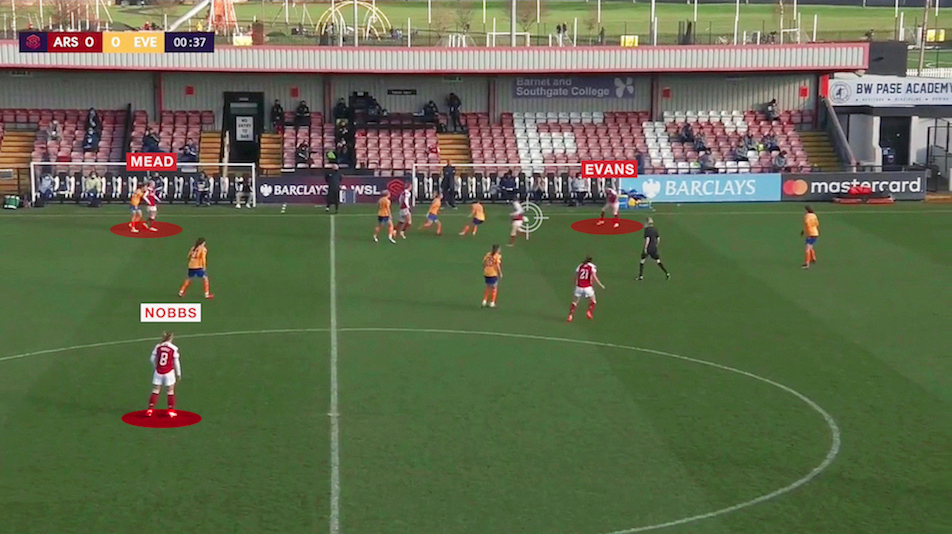 Now look at where she is a few seconds later, the first time that Arsenal possess the ball on the left. She is now positioned much more like a second striker. It is the role Caitlin Foord has been playing for Arsenal in recent weeks, as a left-sided forward with license to move inside. You can already see that Everton’s diamond formation in midfield is struggling to close the gaps and there is plenty of space for Nobbs to run into. 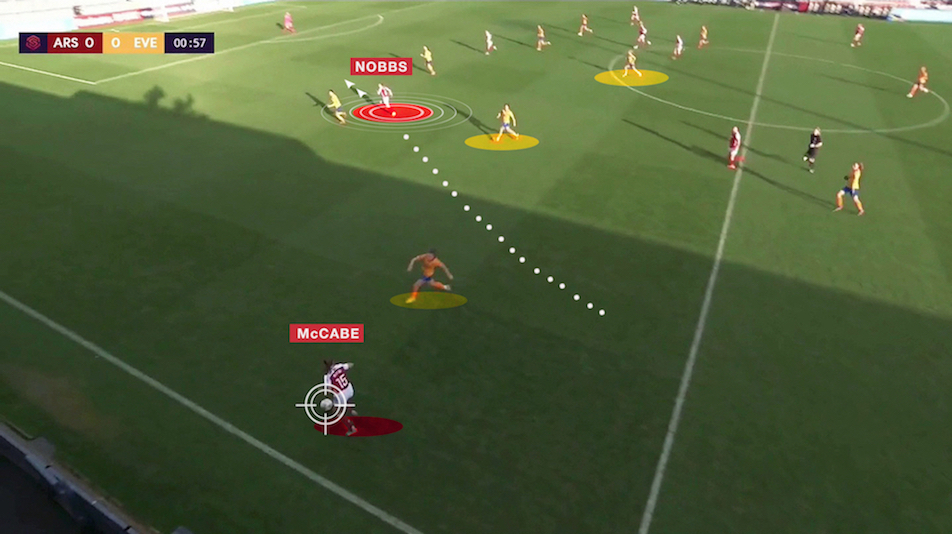 McCabe doesn’t elect to make the pass on this occasion but we see something similar just before Nobbs opens the scoring. Again, Everton’s diamond has been stretched apart like wet tissue paper and Jordan isn’t taking up crossing positions out by the touchline, she is moving into the left half-space and towards the area. 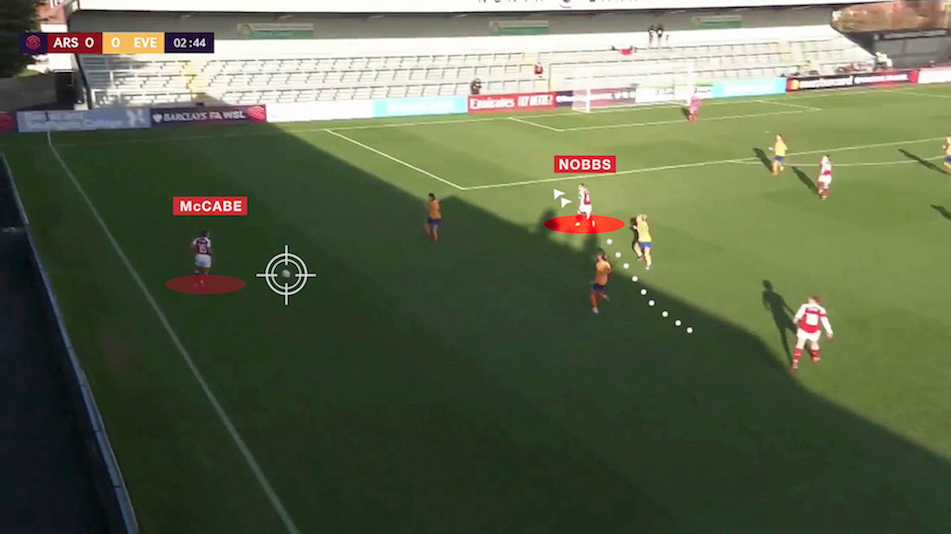 The attack eventually progresses to the right and we can see Lisa Evans and Beth Mead are much more in line with one another. Arsenal want width on this side of the pitch, they want Mead and Evans poised to put the ball into the area. 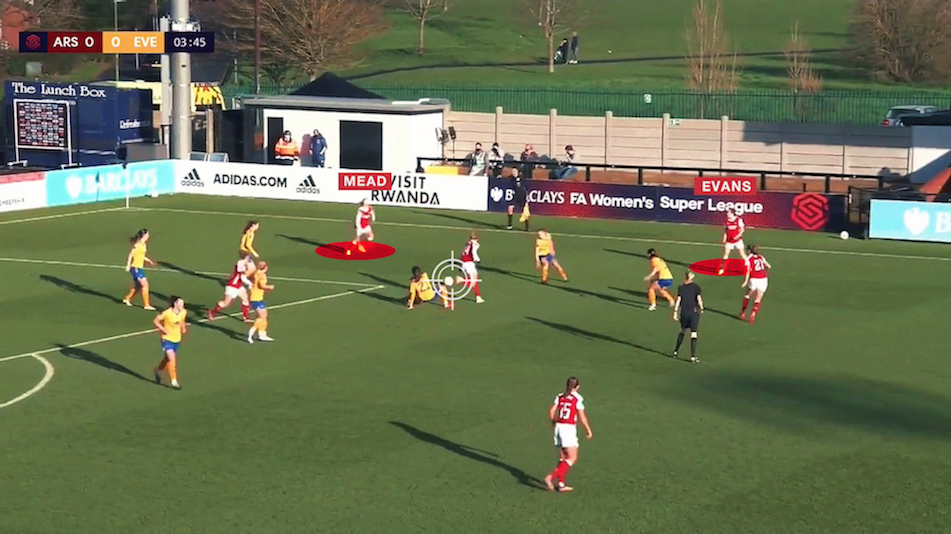 Sure enough, the ball breaks to Beth and when she whips the ball in, Jordan Nobbs is not standing on ceremony on the left wing or even at the back post, she is attacking the ball and her featherlight touch gives Arsenal the lead. 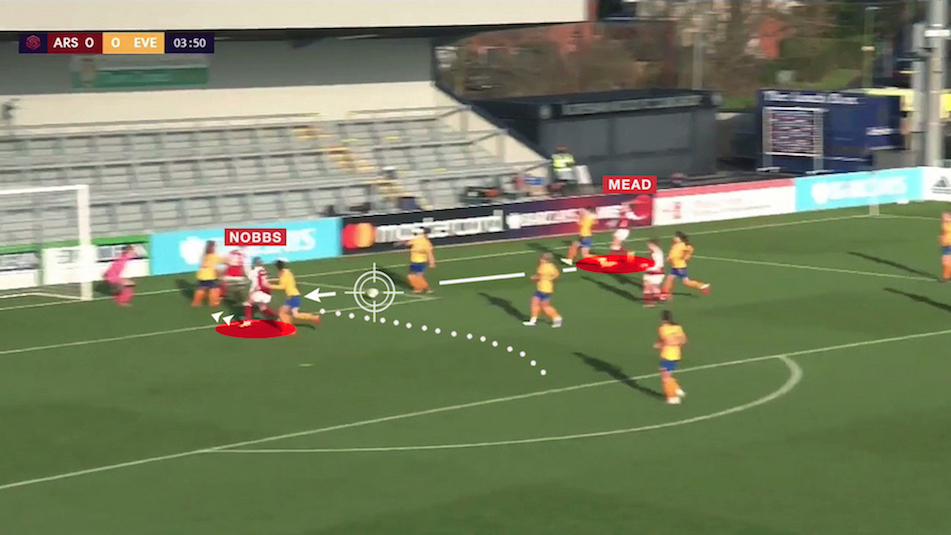 Because that move started on Arsenal’s left before going over to the right, Everton haven’t clocked that the Gunners are targeting Everton’s left-back. Look at Joe Montemurro talking to Lisa Evans here as the ball trickles out for a throw on the right. He smells blood on that flank. 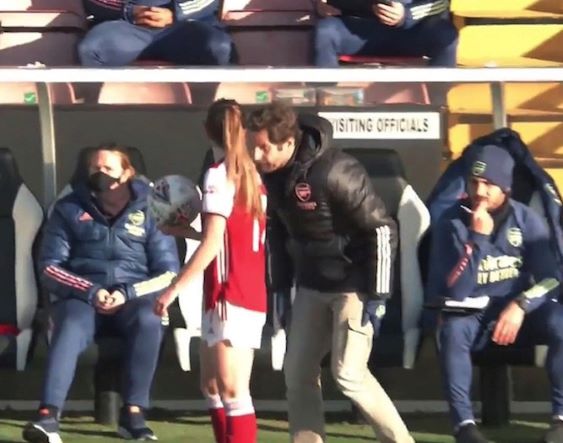 Just before, when Evans went down the right but couldn’t keep it in, Joe shouted to her ’see what I mean, see what I mean – it’s always there‘. It’s a very clear plan!

A few seconds later, Malin Gut picks up the ball in midfield and there is only one area she wants to hit. She opens Everton up with a wonderful lofted ball into their left-back area sending Lisa Evans into space. 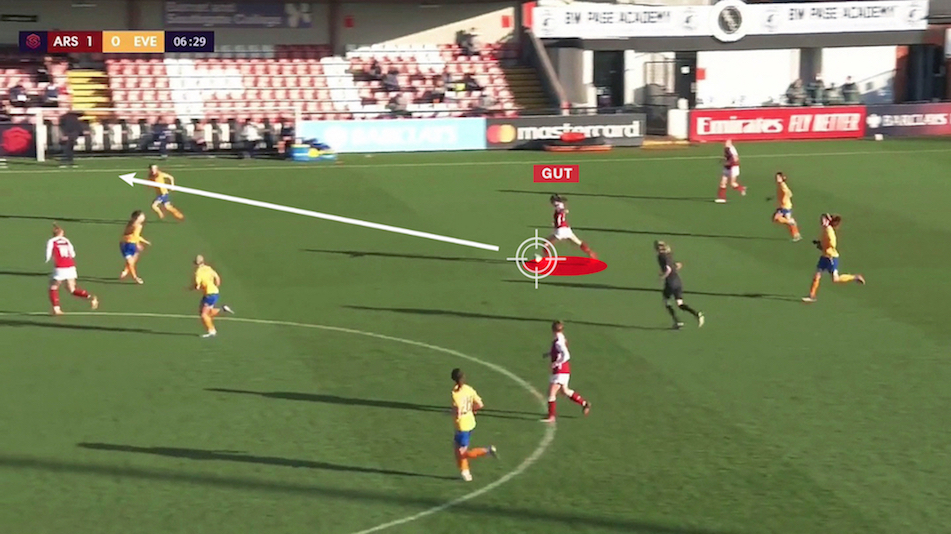 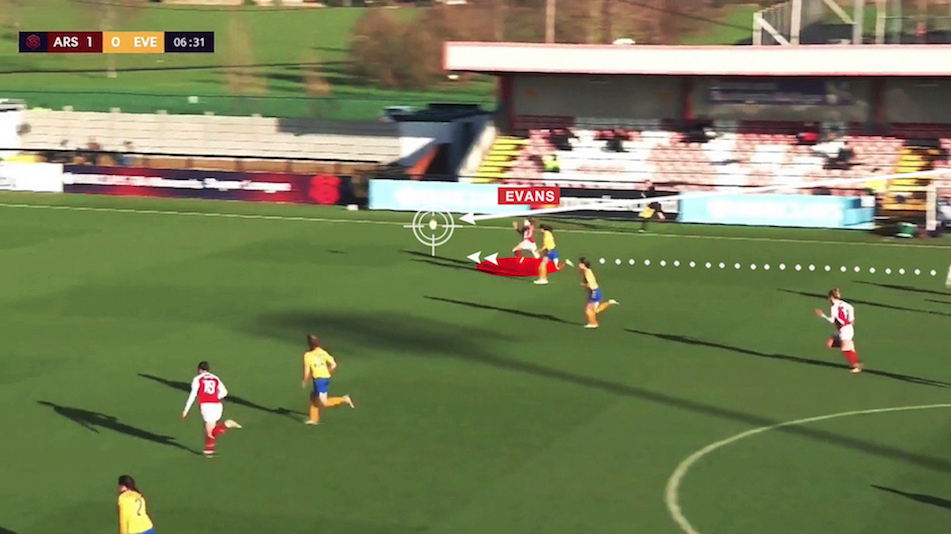 It’s not long before Arsenal score a second by attacking Everton’s left-back area again. Leah Williamson wastes no time in playing the ball into that area from the back finding Jill Roord in a frankly ludicrous amount of space. 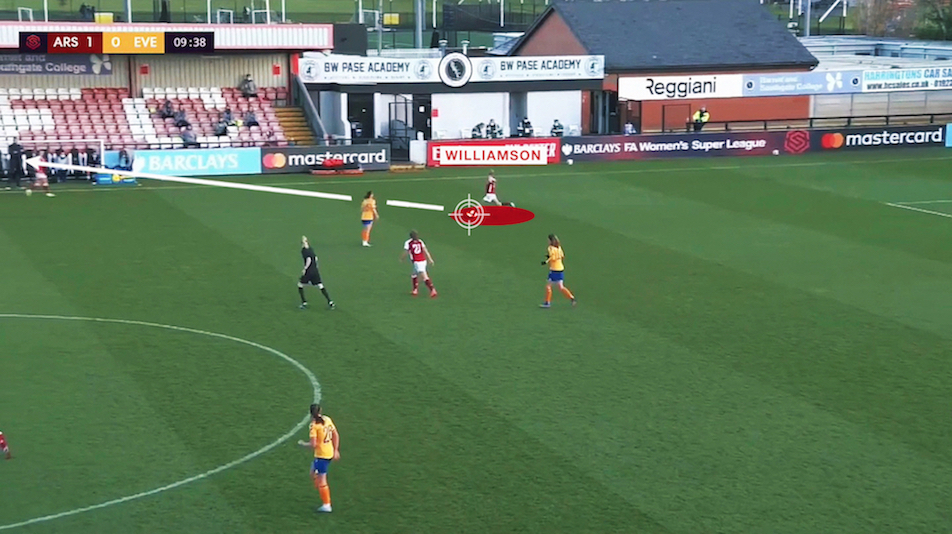 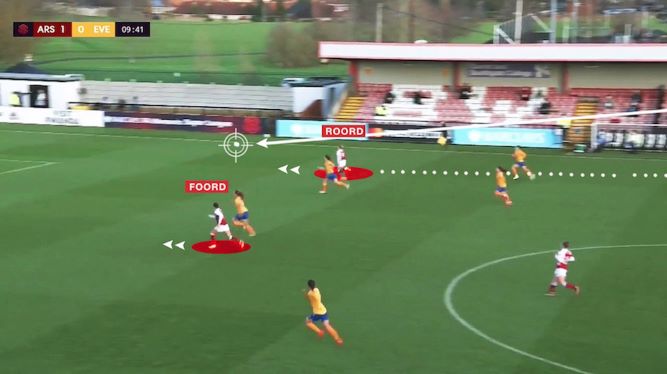 From there, it’s a simple cross from Roord and a tap-in for Foord. Look again at where Jordan Nobbs’ position as the ball comes in, trying to create an angle for the cutback. Again, this is not the typical area a left-winger would be standing in. 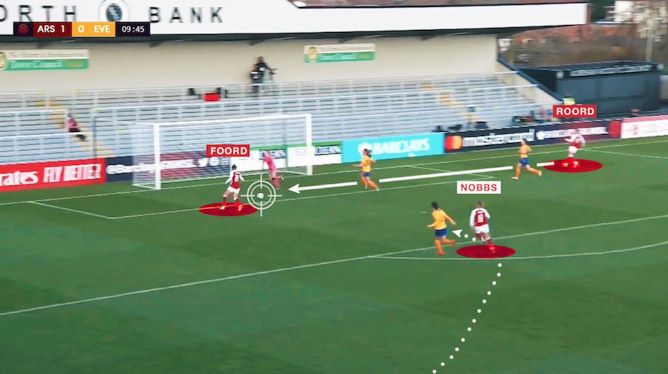 The next time Arsenal work the ball down the right, look again at how connected Beth Mead and Lisa Evans are, almost like players on a fussball table, compared to the left-hand side where Nobbs moves inside every opportunity that she gets. 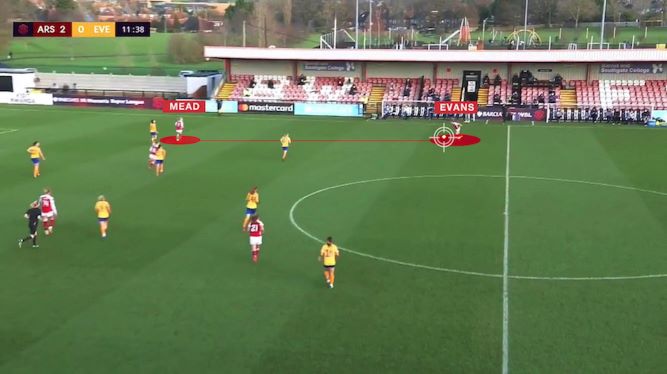 Once again, here, as soon as the angle is available, Leah Williamson’s first thought is to try to hit that Everton weak spot again. This ball doesn’t quite make it but you appreciate by now that Arsenal’s Plan A is to drop the ball into this area as often as possible. 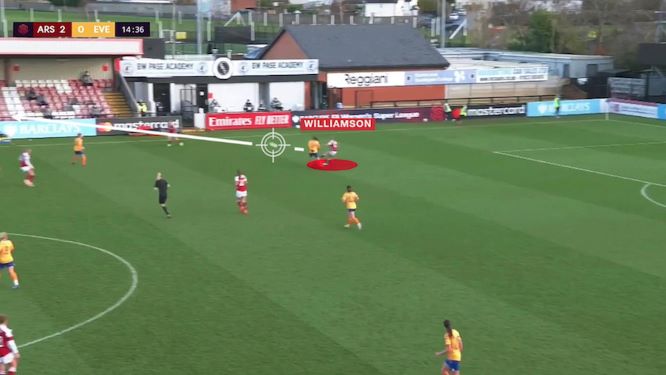 Arsenal try it once again when they build out from the back in the 25th minute, it’s Malin Gut again who sweeps the ball out to the right but just look at the bottom of the screen. Jill Roord comes short for the pass and drags left-back Danielle Turner all the way to the halfway line and well in-field, leaving lots of space behind her. 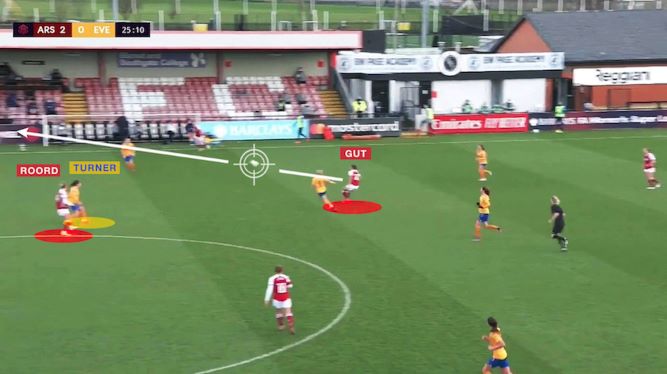 The ball finds Mead right out on the touchline and Evans makes an overlapping run. Look at how much space Evans has after just two passes. 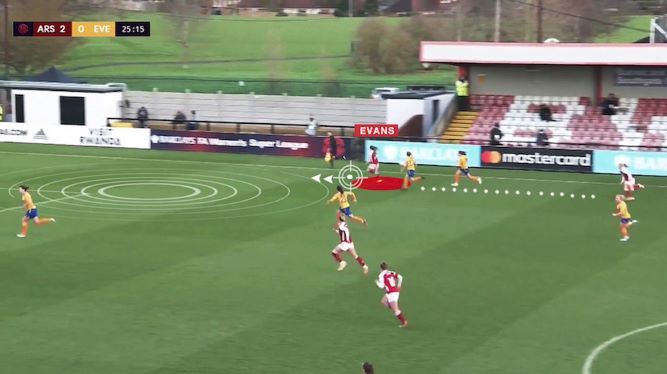 Just under ten minutes later we see a similar move, it’s Leah Williamson again who looks to plant the ball into that area of the pitch once more and with one pass she nearly puts Kim Little through on goal in that same area. 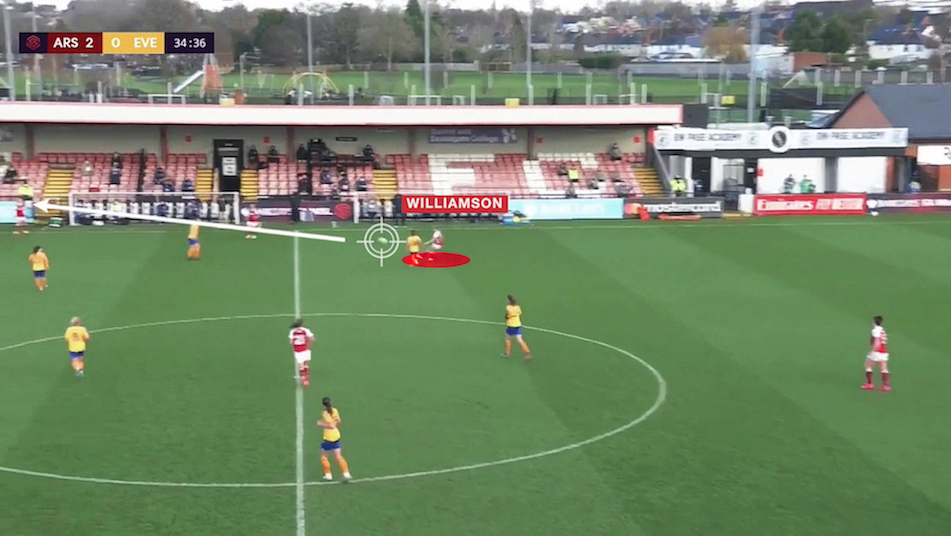 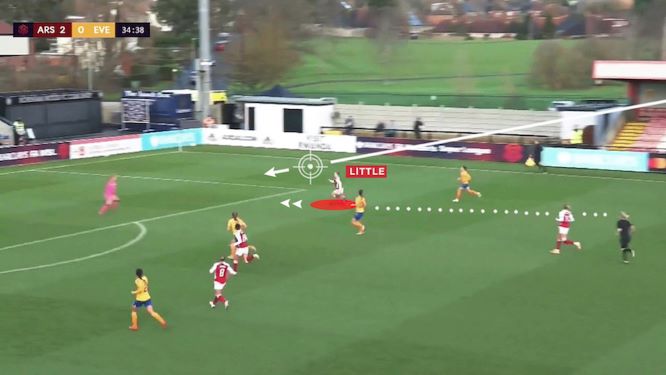 It was no surprise that Willie Kirk made a change at half-time, taking off Danielle Turner at left-back and subbing in Poppy Pattinson. Arsenal didn’t get as much change down that side in the second half so there was a tactical irony in their fourth goal.

This time Nobbs picks up the ball more or less where you would expect to see a left-winger. Look at Beth Mead at the bottom of the screen, who can already see the space ahead of her. So too can Jordan. One of the things Arsenal miss most when Jordan doesn’t play is the speed with which she acts, the Gunners can be a bit ponderous at times but Nobbs thinks and acts quickly. 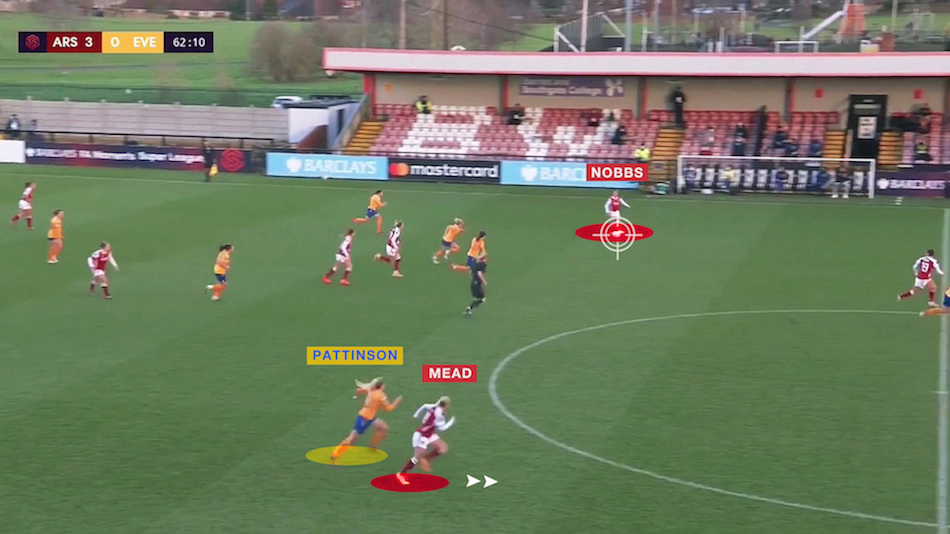 It’s a great pass from Nobbs and Pattinson keeps pace with Mead but there is far too much space for Beth to work with from an Everton perspective. It means Pattinson overcommits to the challenge as Beth chops the ball inside. Pattinson is expecting her to go outside on her favoured right foot. The lack of support around her causes Pattinson to overcommit and she takes herself out of the game, giving Mead space to shoot. 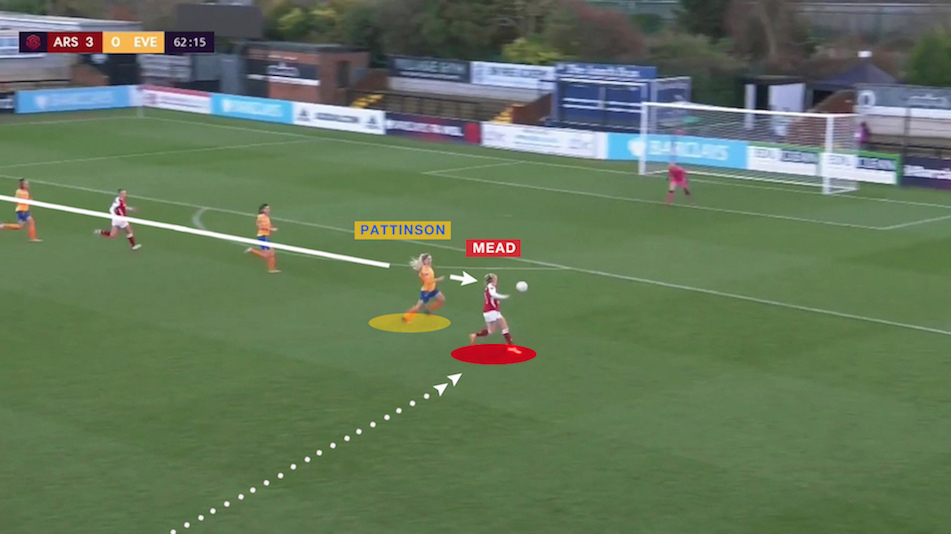 Mead uses Everton defender Damaris Egurrola as a screen for the goalkeeper and Egurrola makes the mistake of turning her back and making herself smaller, allowing Mead to shovel the ball into the far corner and put the seal on a fine day’s work for Arsenal. 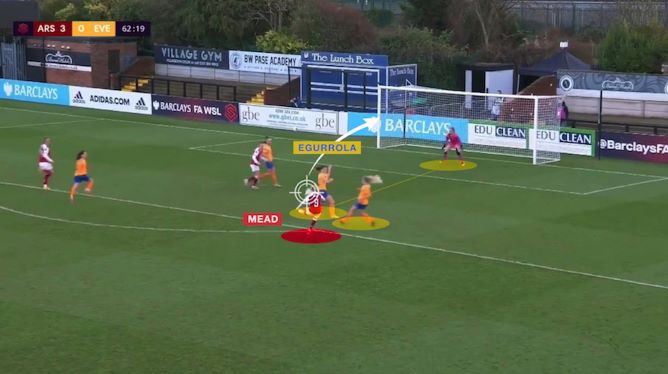