On March 21, 1933, the Nazi-controlled Reichstag passed a law making it a crime to speak out against the government. The “Regulations of the Reich President for Defense from Treacherous Attacks against the Government of the National Uprising” made even the slightest expression of dissent from Nazi ideology a criminal offense.

This new law, among other totalitarian measures, was part of a process known as Gleichschaltung… the process of achieving rigid and total ideological coordination and uniformity in politics, culture, and private communication by forcibly repressing (or eliminating) independence and freedom of thought and expression. 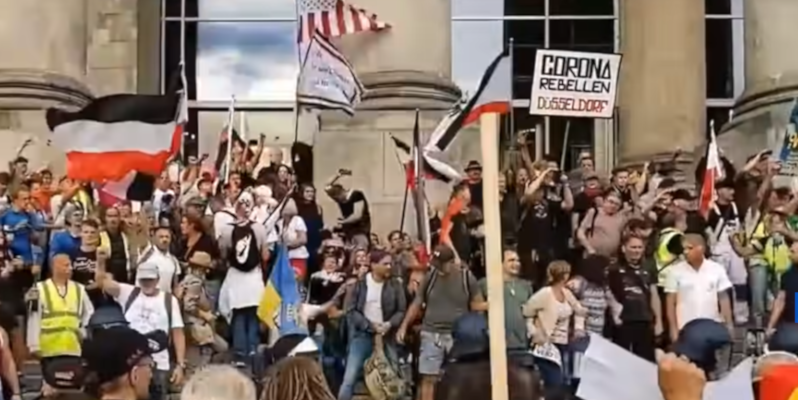 GloboCap hasn’t done anything that heavy-handed in the course of rolling out the New Normal totalitarianism, but that’s mainly because they do not have to. When you control the vast majority of the global corporate media, you don’t need to pass a lot of ham-fisted laws banning all dissent from your totalitarian ideology. This isn’t the 1930s, after all. Over the last ninety years, the arts of propaganda, disinformation, and perception management have advanced to a point that even Goebbels couldn’t have imagined.

The skill with which GloboCap and the corporate media delegitimized the anti-New Normal demonstrations in Berlin, London, and other cities last weekend is a perfect example of the state of those arts. I’ll focus on Berlin, as that’s where I live, and the so-called “Storming of the Reichstag” incident, but it works pretty much the same way everywhere. I believe there was a curious incident involving a person with a fascist flag in London, and that the UK media have now officially chosen David Icke to be the movement’s figurehead.

In Berlin, in the days leading up to the protests, government officials and corporate media propagandists did what officials and propagandists do… they relentlessly repeated their official narrative, namely, that anyone protesting the New Normal (or doubting the official Coronavirus narrative) is a “violent neo-Nazi extremist,” or “conspiracy theorist,” or some other form of existential “threat to democracy.”

This official narrative was originally disseminated following the August 1 protest in Berlin, the scale of which took the authorities by surprise. Tens or hundreds of thousands of people (depending on whose narrative you believe) gathered in the city to protest the New Normal and its increasingly absurd “emergency measures.” The German media, CNN, The New York Times, and other “respectable news outlets” uniformly condemned them as “neo-Nazis,” or insinuated that they were “neo-Nazi-sympathizers.”

Despite the finding of Germany’s Federal Office for the Protection of the Constitution that only “individual members of far-right-groups” had taken part in the August 1 protest, and that “far-right extremists had no formative influence on the demos,” both the German and international corporate media pumped out story after story about the ultra-violent neo-Nazi hordes that were about to descend on Berlin, again!

Der Tagespiegel, a major German newspaper, reported that the demo was being “infiltrated by Nazis.” Die Tagesschau, the German BBC, shrieked that “neo-Nazis are mobilizing!” RBB, another public broadcaster, reported that the “traveling circus of Corona-deniers” was heading straight for the city! (N.B. Any reference to any kind of “deniers” in Germany evokes Holocaust deniers, i.e., Nazis). Ver.di, the German journalists union, warned their members that they were expecting reporters to suffer “double-digit physical attacks.” And these are just a few of countless examples.

The American and UK corporate media also did their Gleichschaltung duty, disseminating the official “Nazis are Coming!” narrative. (I don’t need to do the citations, do I?) And, of course, Antifa joined in the chorus.

On Wednesday, three days before the demo, having successfully whipped the New Normal masses up into a state of wide-eyed panic over the imminent neo-Nazi invasion, the Berlin government banned the protests. The New Normal masses celebrated. A few concerns about … you know, democracy, were perfunctorily voiced, but they were quickly silenced when Interior Senator Andreas Geisel explained that abrogating the people’s constitutional right to freedom of assembly, and freedom of speech, and to petition their government, was not in any way a totalitarian act, but was purely a matter of “protecting the public health.”

“I’m not willing to accept a second time that Berlin is being abused as a stage for Corona deniers, Reichsbürger, and right-wing extremists.”

Then, in a particularly Orwellian twist, although the protest itself had now been banned, the Berlin government decided to approve a “counter-protest” against the banned protest. I’m not quite sure how that was supposed to work.

The night before the demo, an administrative court overturned the protest ban. It didn’t really matter, as the authorities knew they couldn’t stop the demo in any event. Banning the protest was just part of the show (and the Gleichschaltung process the show was part of), meant to emphasize the existential threat posed by the bloodthirsty Nazi legion that was on its way to sack the city.

On Saturday, hundreds of thousands of protesters (the overwhelming majority of whom were not neo-Nazis, or Nazi-sympathizers, or any other kind of monsters) poured into the streets of central Berlin. The police surrounded them, trapping them on the avenues, closed off the side streets so they couldn’t get out, and, once again, tried to ban the protest on the grounds that they weren’t “social distancing.” Everyone sat down in the street. Cops stalked around in their masks and body armor, sweating heavily, and occasionally pushing people. Lawyers made phone calls. It was very hot. This went on for quite a while.

Eventually, the court instructed the police to let the demonstration go ahead.

And the rest is history… except that it isn’t.

According to the official narrative, there were no hundreds of thousands of protesters.

There were “tens of thousands,” and they were all “neo-Nazis,” and “Nazi-sympathizers,” and “Coronavirus deniers,” and “stark-raving mad conspiracy theorists.”

(Full disclosure: I was there with them, and, yes, indeed, there were some neo-Nazis among the hundreds of thousands in the streets, but, just like at the August 1 protest, these far-right boneheads were a small minority and not at all welcomed by the majority of the participants, no more than the Trotskyists and anti-Semites were welcomed at the 2003 anti-war protests before the US invasion of Iraq, although, yes, they were definitely there.)

In any event, hundreds of thousands of protesters made their way down Unter den Linden, through the iconic Brandenburg Gate, and onward to the main demonstration, filling the Straße des 17. Juni from the Brandenburg Gate to the Siegessäule. By now, I assume you’ve seen the pictures. Or maybe you haven’t. It’s actually fairly hard to find any photos in the media that give you any real perspective.

And, finally, we have come to the main event… which, of course, was not this enormous gathering of totally non-violent, non-Nazi people peacefully protesting the New Normal totalitarianism, nor the speech of Robert F. Kennedy, Jr. No, the “story,” the official main event, was the “Storming of the Reichstag building by Nazis.”

How do you manage to delegitimize a peaceful mass protest against the corona measures in such a way that the media report not about a protest by hundreds of thousands, but about the “storming” of the Reichstag?

Quite simply: you approve an application by a group of Reichsbürger to assemble directly in front of the Reichstag (N.B. the official applicant for this assembly was Ex-NPD-member Rüdiger Hoffmann) and station only three policemen in front of the west entrance despite the large police presence everywhere in the area. Then you let a crazy Q-Anon-chick scream into the microphone that “Donald Trump has declared freedom,” that “the police have laid down their weapons,” and that “everyone should now occupy the steps of the Reichstag,” and, presto, you have the images you need to dominate the coverage … a mob of a few dozen people with Reichsbürger flags “storming the Reichstag.”

Never mind the fact that the massive demonstration at the Siegesäule (i.e., Victory Column) organized by Querdenken 711 had absolutely nothing to do with this incident, which was carried out by a right-wing-extremist splinter group. The demonstration had already been delegitimized as a protest staged by Reichsbürger extremists and tin-foil-hat lunatics in the days leading up to it, and now the visual confirmation was provided.

In a video of the lead-up to the “Reichstag storming” incident, Tamara K., a natural health practitioner, and pretty obviously a far-right wacko, is the “crazy Q-Anon-chick” in question. You can clearly hear her advising the crowd that “there are no more police here,” which the video confirms. Or rather, the few police that were there had left the building completely unguarded and pulled back to well behind this assembly of obviously far-right-extremist-type clowns (who, remember, had been granted official permission to stage their assembly at the steps of the Reichstag). This, despite the days and weeks of warnings of a “neo-Nazi invasion” from government officials and the corporate media.

Go ahead, call me a “conspiracy theorist.”

Anyway, once the Reichstag steps were thoroughly occupied by far-right loonies and the Reichsflagge were in the right positions (approximately four minutes into the video), the police finally arrived to mount their defense. It was touch-and-go there for a while, but at the end of the day, democracy triumphed. Naturally, there were plenty of journalists on hand to capture this historic drama and broadcast it all around the world.

And there you have it, the official narrative, which Saskia Esken, SPD co-leader, succinctly squeezed into a tweet:

“Tens of thousands of far-right radicals, Reichsbürger, QAnon followers, Holocaust deniers, anti-Semitic conspiracy theorists, and esoterics, who declare the media, science, and politicians ‘guilty’ and openly call for the storming of the Reichstag and a coup d’état. That is the 29 August Berlin demonstration.“

Oh, and yesterday, as I was writing this column, I saw that the Berlin Senate had passed a new regulation requiring the participants of any future protests to all wear masks… so I take back what I wrote in the beginning. It looks like GloboCap, or at least its German branch, has some ham-fisted totalitarianism left in it.

I’ll keep you posted on the Gleichschaltung process, and the advance of the New Normal totalitarianism, generally.

In the meantime, remember, this is just about a virus! And the Nazis really are coming this time! And looting is a powerful tool to bring about real, lasting change in society … oh, yeah, and the chocolate ration has been increased!